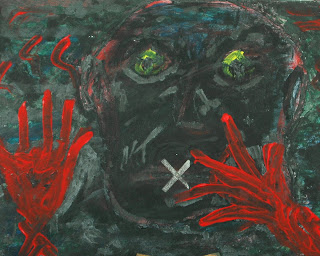 THis weeks task was as follows

If you like, you can write about an old memory that comes to mind while there (this often happens when somewhere new- if it doesn't, just write about the experience)

And you can link the experience and the memory if you're feeling adventurous.

The poem cannot be more than 40 lines long

The poem shouldn't rhyme. Aim for similar line length, giving a nice shape to the poem.

I've been nowhere globally but everywhere locally except the local Protestant Church. I was curious for a goo inside but never made it.

We haven’t a prayer.

I wanted to go to the ‘protestant’ church

And I wondered of the etymology of the word-

my deepest sorrow and greatest gift-

I wondered if I wanted to make a ‘protest’

A plea for reformation

By entering where my mother and father joked, or believed,

They would be struck down.

Instead I went to mass-

I feel I should confess that I still go to mass

And we had a missionary priest

Asking us to open our hearts

And I was thinking that our poor Catholic hearts are broken

that it’s our eyes that we need to open.

(Well it makes a change from poor fuckin Paddy Kavanagh)

about Uncle Vanya and his dysfunctional family,

The ‘Cool factor’ of atheism, and the alienation of Catholicism.

See the ultimate dysfunction of his global family

And thus an answer to his unrealized confusion.

And I told him this on the way out

in the few seconds that I had

For that is all we are afforded

And I felt good for 5 minutes,

Self-righteous and brave and smart,

then I just felt bad again

And all I wonder

As I’m not yet atheist

Is what else for now and at the hour of our death? 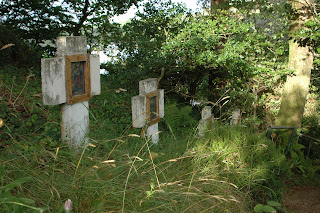 Posted by Totalfeckineejit at 6:21 PM

Well TFE, certainly went on that journey with you, a very honest and sharp poem, well worth the write and therefore the read, plus another fab pic as per usual!!

There's nothing uneducated about your brain Peadar. This poem is another winner.

... and we both went to Mass? I said nothing as I exited ... heading for the great outdoors.

I love your poem! Keep testing the
doorways; and questioning everything.

After choosing Episcopal school, I ran screaming for the hills- a good ol' Congregationalist grabbed my heart with
a simple question " What are your cornerstones ?" (-and he meant life and faith-) that is what saved my bacon. thinking about my beliefs, for myself.

That's a classic Peadar. Weighty stuff. I nominate that for inclusion in the next poetry bus mag

Very sharp and topical this:
And I’m praying to God this ordinary man of God would find a mirror
See the ultimate dysfunction of his global family

And thus an answer to his unrealized confusion.

And I liked how you made a nearby place mysterious too.

Oh I am so like you, except for the Catholic thing :) I always question the corporate church & seek answers from my own personal God.

No doubt about it, Peadar. This is one of your best. Once, the good Monsignor said to me, "If you don't question your faith, you're not a good Catholic." I'd say you're one of the Catholic faith's finest.

Forgot to say how much I love the moongazing hare - beautiful photo. I've just read your poem again and envy the honesty with which you write.

Great poem TFE, I'd love to hear a priest quoting Chekhov. I do love to hear them say the word "Cool" though, (last heard in mass in reference to Britney Spears - they say it with such resentment)
Excellent finish.

Really liked this TFE, so much to ponder on. And this brilliant transition;

Instead I went to mass-

and the dark night of the soul.

I'd suggest the money bagging ministers look in the mirror too - but the problem is they do and only see their pockets and their over styled hair and makeup as their supreme being. Excellent entry - honest and thoughtful. I just questioned the word protestant for the first time about 6 years ago. We're not all still protesting, are we? Surely our differences must be settled by now and a new name in order.

I see I'm on the calendar for the next bus tour! I take these assignments veryveryveryvery seriously. I've already posted three offerings for Monday - any and all of which will probably result in an insulting middle of the night phone call.

This is amazing! You put me right theere with you, not just in mind but also in spirit. Only really good poetry does that -- transports us. Thanks.

I agree with Uiscebots about the magazine.