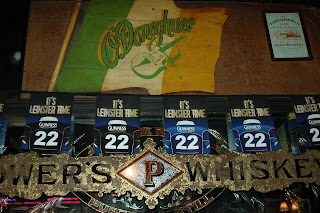 THis week it's the turn of Uiscebot or as he's listed in The Golden Pages 'The singing plumber'
There is much competition among all the trades in Dublin with the recession and all, but Uiscebot has cornered the market in a newly created niche , singing plumbing.

WEll versed in pop, rock and opera , Uiscebot can belt out the tunes of your choice while he plumbs the depths in your new bathroom suite .Bathroom tiles and floors provide excellent accoustics for his rousing renditions of 'Nessun Dorma' and 'Ave Maria'

For an extra €50 an hour Uiscebot will bring along his famous dancing Orangutan 'Charlie' who is a talented Sean nós (old style) dancer as well as being a dab hand with a monkey wrench. You have to keep an eye on Charlie though as he's obsessed with obsolete equipment, water levels and heat conservation, before you know it he'll be fiddling with your ballcock and lagging your cylinder.
And if there is an old boiler lying around he can't wait to get stuck in.

Uiscebot and Charlie are very conscientious, a lot of plumbers when they try to fix a blocked toilet are just going through the motions but not these two, they like to see a proper job done, even if it turns out to be real big sticky job, something they can get their teeth into. When other tradesmen are all at sixes and sevens, our heroes stick to number ones and twos

But the only blockage on the agenda this week is writers block and Uiscebot has just the cure, so get over to his blog and check out the inspiring challenge for this week's world famous Poetry Bus.
Go on ! Fuck off out of it now and get creating!

Ps I should also point out the little known fact that today ,between 2 and 3 in the afternoon, is the longest hour, being 60 minutes and one 'leap' second. This phenomenon occurs only once every 650 years and is all to do with the Earths orbit around the sun and the moon's gravitational pull. Due to a very large hotspot or 'solar flare' on the far side of the sun, the Earth thinks 'Feck that's a bit hot!' and deviates slightly off it's normal course creating an anomally in the time/space continuum.

This anomally must be corrected or the entire planet will be plunged into eternal darkness as we fall from our orbit around the sun. The moon is like a giant magnet and the earth a giant spoon and if we don't keep our course and speed constant then the centrifugal force keeping us on route will diminish and we will be playing pinball with the planets as we spin out of control.

The extra second makes the Earth think it's bit late on it's route and encourages it to speed up by ignoring the pain of the extra heat and sticking to it's normal course, but this only works for 650 years till the Earth thinks' feck this !' and deviates again.

650 years may seem a long time but relatively speaking in the ancient cosmos it's only a fraction of a second. So don't waste it,this leap second, take it as time to do something special with family or friends, after all we may not be here for the next one.
Posted by Totalfeckineejit at 1:01 PM

Ah .. but we only have 18 years to wait for the next 'Supermoon' and rising tides!

PS...the plumber and Charlie have permission to lag my cylinder but NO fiddling with my ballcock.

Fascinating stuff Peadar - you should get in touch with the BBC with a view to having your own TV series on the solar system. I'm sure the viewing ratings would be fantastic.

have just used up my leap second to click into the comments. Time well spent I reckon.

The way things are going we may well not be here as you say.
Love your new header and wonder if that smiling face in the top right hand corner is a bit of a metaphorical self-portrait if such a thing exists.

TFE that's the most imaginative and brilliant description of talents I do/don't have ever! Reading through the poems now and post all of them on Monday.

Love your post! most unique and info pleasing, smile and chuckle raising!
Have a great week.

Right Helen, Charlie's packing his lunch box as we speak!

I tried The Beeb Heather but they said I was a charlatan and a fraud.Is that a bad thing?

No better way Nibby. Well there is but that usually takes me at least two minutes.

Jaysus Weaver, I don't know about you but I definitely won't live for another 650 years!

That header was a bit like me little fat face!