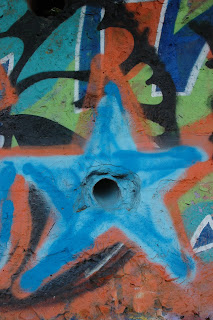 Yes it's that (random) feckin time of the week again! Spot on to the nano second!
For those busy beings and tjose who hate wading through pissed pretensious piffle the poetry Bus prompt is by The (World Famous) Watercats! HERE

THey think it's just beginning. It is now! I'm even writing Haihooey, I really must be fluthered.

Sorry,It just slipped out, ooo-er Matron. Lucky it was only a little one.

But now, come here to me, listen, do you hear that? It's the sound of magnificent,benificent bicycle wheels zinging down the tarmac at top speed, pell mell, harem scarem, flat out, baldy perished tyres and down-to-the-metal brake blocks, heading for brick wall, red and crumbling and warm and imminent and... Ten green bottles sitting on the brick wall like crickets, rasping for the sunshine, waiting for the impact, waiting for blood,waiting for the great leap forward..

We are never too late until it is too late, so, get off your bicycles, brush off your poetry boots and get kicking arse.

Quicker than you can say 'Quango' get out there and Tango, dance the light sabre fandango, fantastic, Plastic Bertrand? That'll do for me, 'Ca plein pour me another en watercat coleur' for the good times ,your head not yet upon the pillow, the wee small hours, the mind journeys without a single step a thousand times a thousand and more miles than lightyears the Buzz of light ears, and a bus will follow... follow, try to remember and if you do then follow me follow down to the hollow of your heart where it must all start, us rag and bone men and women with or without a ladder, let words be your steps from sadder, the moon light to guide us till a bus will lead the way, headlights like mighty luminous lemons squeezing through the night air, cutting the dark into two giant gin glasses, turbo tonic symphonies from our knees we rise and rise like steam from the heavy horses piss as the dawn breaks and... if...if..if.. the answer is 'I don't know' then the question must be 'Why?' But why is that? I don't know.

But I do know THe Watercats are from Obscurity in North West Texas ,US of A. They wanted to leave Obscurity behind and head for Glory in The Appalachian Mountains but turned left instead of right at the little town of Indecision Idaho and ended up at the foot of a mountain in Waterford Ire Land which is in the ancient county of Europshire.
The Watercats were still known by their original name of Pa Burke and The Middle Digits until they came up against The sheriff of Waterford ,Captain Louis Mac Blodstayne , who used to round up all the unlicensed kittens of the county and drown them in Lough Upyadortas.

The newly arrived animal loving band immediately set to work writing a protest song to inspire
and unite the good people of Waterford against the evil sheriff.The resulting song 'Drown another kitten and I'll twat you' proved to be so popular that as a charity single it raised enough money to buy a license for every cat in the land, not one single kitten was drowned and the band became known as 'The saviours of The Watercats' or The Watercats for short.

Now they want us to help them write another protest song. Don't say ' Me? 'How?' say miaow!
Don't say 'I couldn't' , say ' Of course' for we are off course, on the one road singing along, singing the poets song.
All together now, shooby-dooby-do-wah-wah-tercats!
Posted by Totalfeckineejit at 8:17 PM

Follow from the hollow of your heart... magickness... love the story of how Watercats got their name too, they'll have to put that in the boxset

My brain is reeling Peadar. I thought cats didn't like water.

please let us use that on our first album sleeve! :-D

looking forward to the results of this and I'm in a fundraisy frame of mind, so I thought when we make the recording of the results, I can e-mail you's the mp3 and you can sell it to make fundage for the poetrwy bussage :-) it makes me all warm inside to think of the pence you might make!.. see you on board king of eejiting!

Not too sure what the OOSH! signified for my 14 lines, but I enjoyed producing them, whatever! LOL

Like the story of how Watercats got their name... Beautiful creative page. Love it :)
Warmly
Marinela
Short Poems

I've had e real ponder about this one, but at the moment don't think it's for me - still, you never do know!

Haven't heard that name, "Plastic Bertrand" in a very long time. I feel very old now. Thanks for that!