Booze News and Book Reviews, come on in!

Posted by Totalfeckineejit at 10:53 PM No comments: 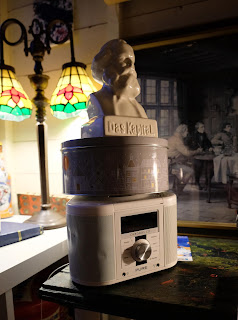 Hello troops,
Hope you are keeping well, staying safe. I wish you all well, lovers, likers, lurkers, even the haters.
I digress. But only in the privacy of my own room..
Now, listen, come here to me. In the family home, the original one in Offaly, before some of the family had to flee at gunpoint to the North (Dad's dad, a peasant, got the local farmer's daughter, a schoolteacher no less,pregnant out of wedlock) and then, child born, return to as near to home as possible, Tipperary, the next chapter.
But going back to the Offaly contingent, my Uncle John, had a clock (with a beautiful bluebird on the sweeping hand) that in later years (my time) would only work if kept face down on the red formica top of the oblong kitchen table. How this was discovered, I don't know. I guess when you cannot afford to replace things, you keep trying 'til you find a way.
Anyways, as I remember, every time you picked up the clock to check the time, it would stop. So after a week or so (in between winds) it would lose a few minutes, but nothing major.
But jesus, I loved that clock. I loved it because of its faults, not despite them. That clock was more special than anything built by the finest clock makers worth thousands, millions.
Fuck knows what happened that ostensibly less than worthless clock. That house, with the usual family fall out, was sold, then levelled, after Uncle John's death.
I managed to retrieve an ornamental donkey, a small cobbler's hammer, a pair of (fire) tongs, and a chair that had been shortened to fit us kids, despite being one of the few sticks of furniture in the house.
But the clock is the thing. That's what I miss. What I think of. Probably because it's lost. I don't know.
BUT a lifetime later, I got a clock/radio/CD player from Mam's house when she died. Years earlier I had chosen it with her, it was (despite my best intentions) useless in sound quality, and overly complex to use. So she never used it, and I felt bad about it. About many things.
I always turned it on when I visited, so it means something to me, despite everything.
And now it is old and worn, like Uncle John's clock.
It fell, got dented. The CD player would not work, the digital display declared the lid open, even though it was closed. I leaned on it and it worked, but as soon as I moved, it stopped, displayed 'open'.
I piled things on top, some were too light, others too heavy.
I experimented with different items for over 40 mins 'til I found the perfect combo.
I love that Marx is the top of the pile. It could have been Trump, or Boris, or Blair, it could have been Leo.
But I don't have them fuckers in the shed.
What am I trying to say? I don't know, you tell me.
Keep safe, stay well.
Love Peadar.
Posted by Totalfeckineejit at 10:46 PM 1 comment:

Time to get back in the saddle, yahoooo! To All The Proselytising Pouters. We hear ya. We also see ya. And this, as we are simple folk, leads to some confusion. Self, selfish, selfie. Cause, caws, effect. Aren't you gorgeous as you pout, and all the worthy things you spout, hat on, gloss on, right on, lovely woman, lovely man, doing all the things you can, for racism,sexism,starvation, homelessness, if not gormlessness, in your poutiessness. Ah, we love you, (not as much as you love yourself) and we love your friends, (not quite as much as they love you) symbiotic amniotic fluid gives birth to all your dreams, your circles as tight, as a sick duck's arse. Oh, your stellar skies, as in the IT you explain the whys and wherefores of literary bores, you lovely man, you courageous woman, where would we be without your words, sublime guidance, like missiles over borders, you are the main courses and the whore d'oeuvres. Mwah! WE LOVE YOU!
Posted by Totalfeckineejit at 10:47 PM No comments: