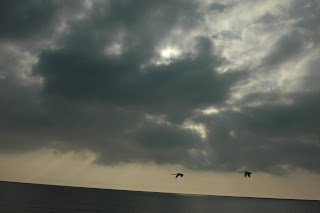 Okay, by now if you have followed my orders/ commands/ ordinances/diktats, you will be in current posession of a somewhat excellent 14 line poem.But now what to do with it?
Should you hang it on the washing line with an odd pair of socks and a lettuce leaf and call it art? Name it Michael and introduce it to your friends down at the pool hall? Should you get it tatood acxross your forehead for the world to see, one person at a time? Or should you stick it in drawer in the spare room never to be seen again except by small spiders and the burglar?

NO! None of these things,or at least you don't have to, for usually there is madness in my method but this time, dear friends, there was method in my madness. Now, if you feel like it, you can send your 14 line meisterwork to this magazine HERE The choice is yours, be brave!

Now for this weeks task self deprecating poetry genius Peter Goulding has lain before us a sumptuous smorgesbord, a veritable cornucopia of tempting prompty treats
HERE

Pete owns Irelands oldest inland lighthouse built in 1923 after Ireland suffered one of the wettest summers on record. People feared that by Christmas the whole island would flood and be only navigable by small boats and dolphins and that many national treasures might be bumped into and damaged just below the water. Pete's 30 ft lighthouse was built in seven hours at a cost of 36 shillings and stands beside the magnificent GPO (Generaly Pissed Office) on O'Connell street.A slight miscalculation in the plans rendered the lighthouse 150 ft shorter than the GPO, but luckily the dreaded floods never came.
Old fears die hard though and an unmanned lighthouse called 'The Spike'was unveiled on O'Connell street at the turn of the millenium and towers over the GPO and the whole of Dublin, ready and waiting for wettest of wet times.
Pete lives happily in the old lighthouse with his 3 wives and 23 children

Oh, and dont forget Monday is Oven Monday, so be sure and get your oven blessed.Traditionally the oldest female member of the family carries the range or oven to the local parish priest where she cooks for him and all his family and friends a magnificent meal and in return he blesses the oven with left over sunflower oil, before the woman, usually tiny and in her late seventies,heaves up the iron aga onto her aching back and carries it home again (being careful not to scratch Fr's brand new 4x4!) her wizzened little old face beeming with varicose veins and gratitude. And even if she dies on the return trip, as they often do, at least the lovely priest has been fedand she can die happy in the knowledge she has earned a plenary indulgence of 10 mins off eternity.
But if she dies on the way to the priest, well that is a mortal sin and she will go straight to hell wearing brillo pad knickers and a hairy shirt There she will spend eternity scrubbing a never depleting mountain of cookers with her arse while listening to 'All you need's a glove' by Those loveable loonypool mop tops The Brutles.
Posted by Totalfeckineejit at 10:37 AM

diktats ? love it- I'll have to keep trying to finish the piece that did not want to be 14 lines...meanwhile I will check out Peter G 's lighthouse, etc.

You have definitely got the most fertile imagination of anyone I know Peadar. And you make me laugh out loud - which I need these days.

absolutely and fantasticuley, uttermost lovage of the new header picture... and all the other things!

Lovely looking magazine! Think I'll hold onto my 14 lines at the moment though.
I like Peter's prompts, and Oven Monday. Who knew?!

Sometimes it takes what it takes!
Not a remarkable piece, but perseverance.
Don't have a clue how I managed the picture, doubt I could repeat it; but here you go!
http://izzy-conversing.blogspot.com/2011/03/poetry-bus-227-811-finished-3311.html

I just love reading your biographies of us, Peadar. Have you been collecting these? They'd make a great book!

Is Monday really 'Oven Day' over there? (I never know when to believe or disbelieve you, my friend.)

Cya on the bus!

just found your blog....
it took a while to work out "what was what"
enjoyable romp!