It's the wrong trousers! 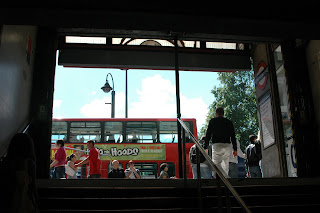 The world has the wrong trousers on.And nothing fits my head either.All is akimbo.All is dark. Glimpses of light come and go like tube stations, but basically I'm in a black tunnel, travelling horizontally when I need to go vertically to the daylight.

I won't go on other than to warn you that the first poem is a dirge, but it is the only thing that fits exactly, so I have to wear it.

Tis Titus's bus drive and a fine one about animals but the only animal I could come up with was me. Apologos. I've added an old one at the end that fits the prompt a bit better, but comes from the same well. I only have one well, I'm beginning to think I only have one bucket too. Links to Titus below and to the side.

Is it a pit or a pendulum
They’ve tied to nights
Sleepless arrow ?

Waxy sweats break out
On the bus the train in the car
The shakes beaded beats like
Tiny hammers and coffin nails
Mirror after mirror
Day after day
Finite/infinite
Fleeting/eternal
Darkness, daylight
Incessant repetition
black dogs barking
And no going back
And no going forward
Grinding the gears, meshing the cogs,
of work, of death , of dreams.


Menagerie a tragedy.
(The auld triangle)


We hibernated most winter
but roared like snotty lions in the spring
We were howler monkeys, whooper swans,
cheeky meerkats always looking for a better view.
Our dads were grizzly bears
who never let the hare sit,
and when they were angry
the women showed their arses-
(only metaphorically, not like baboons)
especially the big ones who
were all cellulite and combustion.
We swarmed like rats in the summer
and swam like seals in the sea,
lounged like lizards on the canals grassy banks
and slept like lambs in our beds.
Mam and dad would fight like cat and dog
then make up like love birds, months later
we would be quiet as mice while the new one came along
When we could we ate like pigs and
as we grew we drank like fish,
Goldfish, that went round and round the pale
but still, like elephants, we couldn’t forget.
Posted by Totalfeckineejit at 9:17 PM

I like the rising panic of a new day in your first poem, had that feeling myself! Your second one is delightful, very artfully put together me likes. Chin up old sausage, springs here.

Wear What Thou Wilt Shall Be The Whole Of The Law!
Actually, that's Crowley, and he was an old charlatan, so maybe Come As You Are (King Kurt) better.

Love the first four lines,
'Live within them
tumble without them
stumble the dire strait
The straightened narrow'
and then the picking up of the rhyme with 'arrow. And yes, a dark place.

But I'm nicking the second for the book.

Wishing you light soon, and Mr T is going for an extraction tomorrow. I've told him he has no other option as the last repair job bill was ludicrous, and bankrupting.

Love the Bitched, Bollixed, Bewildered line in the first one. I'm sure you could turn that into a song.
The second one's very clever and works very well.
And the Jam too!

I remember that zoo poem from its first run out (I think).
As for Parallel lines, it's pretty engrossing start to finish. If you've only got one well, at least there's plenty in it, and it's plenty deep. If you've only one bucket and there's a hole in it, at least you can sing a song about it.
http://www.youtube.com/watch?v=Z6h4LoMgqlI

I'm looking for a Titus animal ode. Am I looking in the wrong place? I clicked Titus's link to this page?

THanks Argent,I am an old sausage,and I'll try to keep one of my chins up!

Thanklee Titus, great driving.Good luck to Mr T, and the rest of The A team.

'Take your time, hurry up, choice is yours, don't be late.
Take a rest, as a friend, as an old memory.'

Thanks Pete. Think I stole that line from Brendan Behan. He won't mind.

And everything,including life, tastes better with a bit of Jam!

Lucy in the sky with diamonds. Titus?? Never heard of him!

Deep, complicated with a degree of taking the piss at others and self! Always good to be balanced in these things. I liked both, but the second poem is true magic! will be back for another read.

Parallel Lines seems to inhabit a dream-world not unlike the one I was stumbling through the other week.

Both poems are wonderful and very strong Peadar and it must be a good thing that you can write so honestly and maybe shed some of your load. I hope the darkness soon lightens for you and that a bit of sunshine will enter your life and your soul. Hang on in there - you have more fans and friends than you know and we are all rooting for you.

What hath darkness wrought? Fear not, my friend, you will conquer it!

Phrases like, "who never let the hare sit" and
"all cellulite and combustion" -

unmistakably YOUR work! Isn't it grand to have a voice that is recognizable as only your own?
My prediction is this: You will rise from the pit, Peadar - come Easter Sunday.

love the animalpoem, all the cellulite and combustion. we take all animal aspects for ourselves: they serve to define our moods.

Couple of good ones here Peadar. I do so hope that Spring cheers you up a lot.
Have written my first poem on my blog since I was ill - that has cheered me up as I realise that maybe after all my creative urge has not died.

Wow that first one struck a little close to home - I'm not sure why, but some days that's my song entirely.

Love the second one - we're all a part of the animal kingdom after all.

liking both of these for every different reasons. i think the second one is the one i'm drawn to at first sight but the first is the one i'd prefer in time

Sorry you're with the black dogs at the moment. Go ride an elephant.

ok - so i love the poem, and i love Down In The Tubestation At Midnight - especially that bass line!

everyone should own an album by The Jam

That straightened narrow - so confining. rubs our elbows and other sticking-out parts raw. Grind those gears and head cross-country!

An amazing menagerie of wit and play on words. Your first verse had me as edgy as a cat on a hot tin roof!

That first piece is a cracker. More a clanger, maybe. A roughshod, flopsweat, clattery dogtrap start into the terrors of a new day. Which, hopefully, never turns out to be quite as feared. Hang tight, Compañero.

Dire views have inspired many fine poems. And you were inspired in this stanza particularly:
These pistols of dawn
their rising panic of
another day
laid out before them
like a swaddled corpse

Your last one is a winner too. It's a lighter version of your world view, funny, clever, your voice is so strong...