There we are walking along the post-storm streets of Dublin,the streets my mother walked years before, I light a candle with thought, without belief, in St Theresa's, Clarendon Street. A candle for her and all those gone before us marked (some would say scarred) with the sign of faith.Our loved ones. Out again, there's a coolness in the air, a calmness, a warmth in the sky and I think out of that/the blue, 'Lapus Lazuli.' I say it out loud, Lapis Lazuli, It feels like two nice marbles rolling an alliterating joy in my mouth up to my brain. I'm not 100% sure what exactly it is, a precious/semi precious gemstone? A title for a new poetry magazine? I know nothing of the double L. We wander in to The National Library, I like the carved wooden breasts on the fireplace, perhaps you are not supposed to touch, but I do, then we wander down to the Yeats exhibition and there out of another blue, a lump, a block, a real piece of 'Lapus Lazuli' in all it's glory. New to me, spookily co-incidental in a darkened room touching on Yeats' fascination with the occult. Then I learn something. A tour guide explains that the Yeats family wanted a quiet funeral for Willy, but his fame would not allow it, so they packed his body off to a rented tomb in France but forgot/omitted to pay the rent and his coffin was turfed out amongst the hoi polloi francaise. 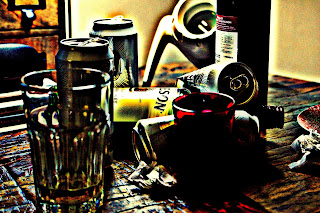 Then war broke out and WB's coffin could not be returned to be buried in Drumcliffe 'til hostilities had ended. By then who knew which coffin was which? There are major doubts that Yeats is buried under bare Ben Bulben's head at all! If not him then qui? And if qui is not il then ou est William? Mon Dieu, quelle question!
Posted by Totalfeckineejit at 12:10 AM

Didn't realise you were seriously blogging again - shallput you on my side bar now.
I presume you know that my beloved farmer had a brain tumour and died back in MKarch?
Well the farm has been sold and I have to move out - I am just going into Leyburn - a mile away - into a bungalow. My son will still live only a mile or so from me which is good. You will be on my side bar in two minutes. Lots of love

Eejit - I left a comment on here yesterday and also put you on my side bar now that you are blogging again. No comment appeared but you have gone on my side bar so fifty percent came right
I am moving because I lost my beloved farmer to a brain tumour back in March. The farm has been sold and I have a bungalow to move into next week. I am only moving a mile into the little town, which will be much more convenient now that I live alone.
Hope you and your family are all well and that life is treating you well. We have a nice little blogging community here - do join us on a regular basis - try John (Going Gently), Rachel, Cro Magnon and Tom Stephenson on my side bar - hope they become a group of kindred spirits for you as they have done forme. They have helped me through the past few months - don't know what I would have done without them. x

Hello Weaver,
I am so sorry for your loss, I had no idea. I hope you are okay, or as okay as anyone could possibly be having lost their partner. I'm glad to hear that you will be near Dominic and hope it will be nice being in the village, that you settle in to your new home. I send you every good wish and send my love and condolences on your sad loss.
Good luck Weaver,
Peadar.

I was going to make a comment about chaos but it seems the above exchanges between you and Weaver restore balance.

To have the Weaver on your blog...is mighty!!...I'm using exclamation marks here...and I've sworn off them recently..that's how strongly I feel...keep blogging.

shallput you on my side bar now.

Ah, poor William B! Even his end captured the essence of the poetic. Your description of the National Library is exquisite. I shared a National Library memory with one of my classes this week as we were discussing research experiences. I was researching Sydney Owenson (Lady Morgan) and discovered in the National Library of Dublin that a piece for which I was searching was actually housed in New Haven, Connecticut at the Yale Library. (I live in Connecticut.) I started to chuckle, and some other researchers looked at me as if I had lost my mind.

Wishing you and yours the very best, Peadar.

God be with you, Weaver.

Thank you so much UplayOnline!

THank you Dr Jeanne Iris, hope you are well!