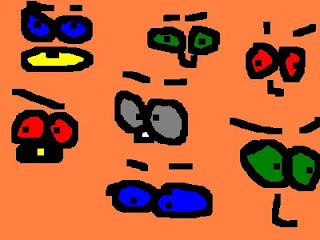 Well Bus Poets, what a trip! What, a trip?Mucho more exchellente and poetic poetry upstairs downstairs, all around town and beyond , far beyond the mysterious beyond.Twas dark, twas shiny, twas death in a bauble, everything you would expect it to be ,only less and much, much more.Music and song and dance and this and that and a bit of the other.Twas square rounded in a peg hole for sure.Jelly ice cream and worcestershire sauce and firelighters.Mamma! It was mia. Thank you all for everything you wrote.

We got a gud thang going, a real good thing going, where are we going? I don't know.Isn't that wonderful? I'm making it up as I go along.The plan is, there's no plan.Actually there really is , but I could be lying.

Thomas Hardy,what a good driver! Didn't crash, gave consideration to poet passengers and fellow internet highway travellers alike.Kept swearing and aggresive gesturing to a minimum, used his mirrors for shaving and before signalling, gave way to the right at roundabouts, braked smoothly, thought things while he was driving and wore a lovely top hat.He was delighted with the whip round you all had for him and is going to buy some venetian blinds in Ikea and a low mileage crash damaged(NSF wing-easy repair) 6 owner Ferrari Testarossa with the money.

I've been interviewing for next weeks driver and have a shortlist of five. Elvis Presley, Ian Paisley, Shirley Bassey, (Smokin') Joe Frazier and Brendan Behan. I'm holding holding a democratic election of Bus Driver here in THe People's Republic of EEjit on Thursday and the winner will be Brendan Behan.

As for the task,it's almost three am so I'll post it anon.
Posted by Totalfeckineejit at 2:11 AM

three am is the very bestest time of day for deciding on bus drivers. Just don't get the guy who does route 3 from Aubière at 8:17. That guy does NOT know how to brake without throwing people into each other. Or maybe that is his plan. Perhaps, but it doesn't work for me to get tossed into the lap of a frazzled woman with really nasty breath before I've even had my second coffee of the day. Thank goodness the french do not take their coffee to go, or there would be hell to pay on that bus.

Get us a good driver!
Who's this Behan guy?

I think we'd all be safer with Shirley Bassey!

Shirley Bassey on the bus would have been lovely. Just think! We could have been listening to "Goldfinger" the whole journey. Does Behan sing?
Waiting, with the anticipation of a Heinz Ketchup bottle, over here.

Good on you TFE.
Though I'd have preferred Bassey as driver. Something in the way she moves.

Three am is magical NanU, a great time to look at the skies as well as deciding bus drivers.The 8.17 from Aubiere sounds very pleasant, precise and efficient, till the bus driver tries to kill his passengers with his over enthusiastic use of the brakes.

Shirley Brassy will have to have a go , H.Could she drive in them stilettos though?

Behan does sing Kat, maybe they should be a double act, Bassey and Behan?

Yes Titus, could tell the minute she walked in the joint.